Cryptocurrency: an Environmental Threat or a Sustainability Solution? 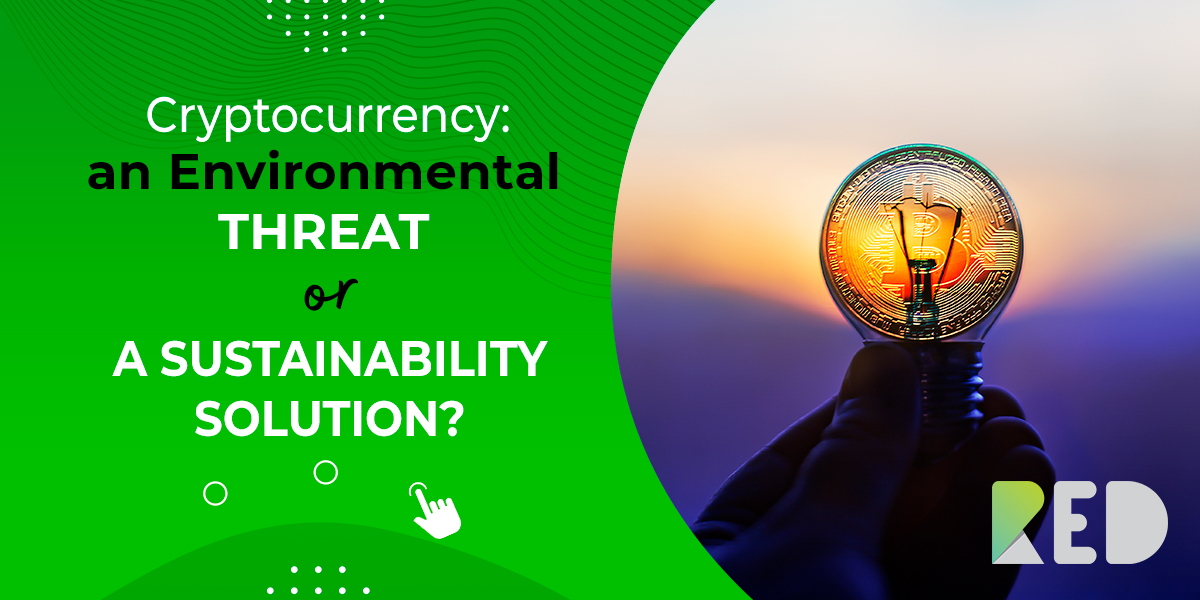 Over the past few years, the progress made by crypto technology has taken the world by surprise, opening up doors to endless possibilities in the digital world. At the same time, however, a great deal of debate has been stirred on its reliability as being environmentally sustainable. Many believe cryptocurrency is nothing short of a promise for a sustainable future and others question its credibility entirely because of the threats it poses to the environment.

So, is it sustainable or not?

Blockchain: the promise for a sustainable future

Here is how this 21st-century technology can make our planet a safe place for the upcoming generations:

Blockchain has the potential to reduce carbon emissions by both incentivizing and adding convenience to taking on green initiatives. That’s why the RED Platform uses a system based on blockchain technology.

At RED Platform, we have also introduced the GTK tokens which monitor carbon offsets. Users can conveniently purchase 1 GTK token and eliminate 1ton of CO2 or any other greenhouse gas in return. These tokens can be purchased by anyone or even claimed by consumers based on their electricity bills.

On the other hand, the platform offers also the producers the same opportunity to claim REO-G tokens which are the Guarantees of Origin for renewable energy producers. Purchasing 1 REO-G is equivalent to reducing 750 kg of CO2 from the atmosphere. REO-G acts as a guarantee of origin, ensuring untampered traceability.

So why are these tokens useful? These tokens are useful because they can be burned to generate Green Sustainability Certificates on the blockchain. They can act as the missing link to a sustainable future, providing concrete evidence that a certain amount of carbon dioxide has been offset.

Blockchain and its energy requirements can lead to the exploration of renewable energy resources. Many experts have suggested that in the future, as governments will begin acknowledging all the good that cryptocurrency has to offer, discussions regarding the usage of renewable energy will inevitably be held and the options available will be put to productive use. Eventually, this will reduce dependency on fossil fuels which is a non-renewable energy resource bound to both eventually finish, and destruct the environment while it lasts.

So these were a few ways in which blockchain technology can lead to a more sustainable future but to make this a fair debate, we must also acknowledge the flip side:

Is cryptocurrency harming our planet?

It is no hidden fact that in recent times, cryptocurrencies such as Bitcoin have been flagged as a cause of energy concern and some have even described it as a rather pointless way of using energy. The process of bitcoin mining is undoubtedly extremely energy-intensive. It is estimated that the Bitcoin network uses more energy than several countries such as the Netherlands and Kazakhstan. Now because fossil-based power plants constitute a major proportion of the global energy mix, Bitcoin mining can be labelled as an unsustainable process that results in greenhouse gas emissions.

However, there is also the possibility that a blockchain will be powered by green energy, as is the case of the Zalmoxis blockchain on which the RED platform also operates. In this case, blockchain technology does not harm the planet because renewable energy is used for its operation.

Final verdict: sustainable or not?

In short, it can be said that cryptocurrency when used effectively can truly be a sustainability solution. If we employ the correct strategies, the impact of its drawbacks can be reduced and as a global community, we can make much greater use of its benefits. Considering the example of Bitcoin mining, this process itself conventionally requires tons of energy, mainly fossil-fuel-based but there are other green alternatives available that can be explored.

If you want to be part of the change, join the RED Platform!