Changing the Value of the GTK Token for the Better 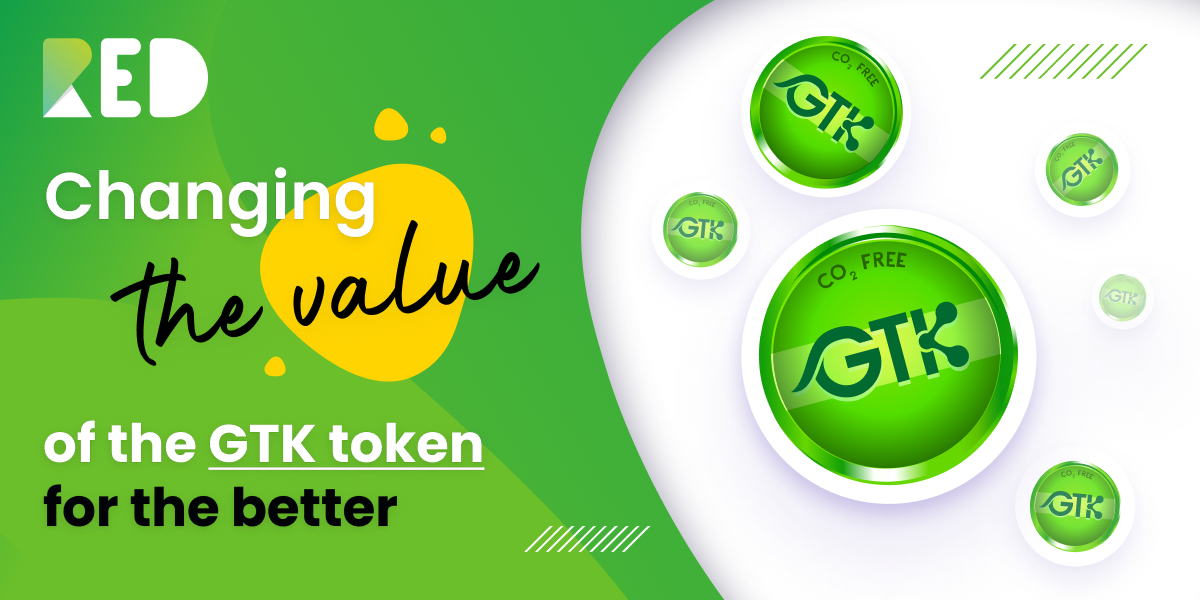 This week we are bringing amazing changes to our unique GTK token. From now on, 1 GTK is the equivalent of one ton of CO2, instead of 1kg, as it was until now. You don’t know what it means? Well, this article is meant to help you, all you have to do is go through it and you will understand everything about the GTK token and its uses.

What is the GTK?

A GTK or Green Token is an ERC-20 token that accounts for the quantity of CO2 avoided to be released into the atmosphere through environmentally friendly actions such as renewable energy consumption, avoiding food waste, capturing CO2 from the atmosphere, electromobility, and other actions.

A GTK can only be used once by companies or individuals to reduce their carbon footprint on the blockchain, by claiming a Green Certificate of Sustainability on the RED Platform. 1 GTK is the equivalent of 1 ton of CO2 avoided into the atmosphere (or any other greenhouse gases such as CH4- methane). This type of token is also issued for carbon credits tokenized for sustainability projects.

How to get GTK tokens?

Are you a renewable energy consumer? Now you can benefit from your earth-friendly actions! Request free GTK digital tokens based on your electricity bills and then offset your carbon footprint. How to do that?

It’s very simple, you only need an electricity bill that has:

The final amount of GTK you can request will be automatically calculated based on the percentage of renewable energy in your tariff. 1 GTK is 1 ton of carbon dioxide avoided to be emitted into the atmosphere.

Then, based on your inputs, the RED Platform performs the calculations and presents you with the amount of GTK you can get and the available Holding rights. So, whenever a user makes a validated claim, RED mints GTK.

Watch a short tutorial, prepared by one of our community members.

Now that you own GTK, are you wondering what to do with them?

RED Platform is offering Traders the possibility to sell the owned GTK tokens on the Marketplace via GTK Offers. GTK tokens that are obtained through a claim process can be sold for MWAT only, while tokenized carbon credits under the form of GTKs can be purchased in FIAT or cryptocurrencies depending on the project developer’s choice.

You can also simply transfer them to other traders on the platform or exchange them with other cryptocurrencies or tokens on our internal exchange.

However, their biggest and most important use is issuing Green Sustainability Certificates. GTK can be used to prove your sustainability and carbon footprint as a blockchain-based CO2 offset tracking system providing untampered traceability. Thus, owning 1 GTK means that approximately 1 ton of CO2 was avoided from being released into the atmosphere. Therefore, the proof of this process is the burning of tokens and the generation of the Green Certificate.

Holding GTKs in your wallet

You should know that for the implementation of the new GTK value, all the orders from our exchange, along with the withdrawals will be canceled. Once the modifications are completed, all users with GTK orders must insert them manually once again.

As for the GTK holders, their balances will be updated automatically, meaning that 1000 GTK, which represents 1 T of CO2 avoided from the atmosphere, will become 1GTK representing the same amount.

Facilitating the process on the platform for traders

Now that you know all these details, are you wondering why we changed the amount of 1T CO2 equivalent to 1 GTK? We have thought of our traders, and we always want to keep up with their needs. That is why we made this decision, in order to be able to offer them a much clearer development process.

That being said, we encourage you to join us in the fight against carbon emissions with the help of GTK tokens. Become a trader and take part in the change!